To All Growers of Spring Malting Barley

There appears to be a chance that the rain is relenting and the second half of March might actually become dry and settled. It will hopefully allow you to make a start with what will be a huge spring workload.

Over the years there is no doubt the wider industry and the grain market has become more complicated and harder to pick a way through with ever increasing pressures bearing down upon it. This year has all the hallmarks of being harder than ever!

A smaller and constantly shrinking wheat crop has the potential to produce a sub 10 million tonne wheat crop in the UK, the smallest for years. The horrendous conditions witnessed since the 22nd September could herald the biggest area of spring barley ever in the UK.

The extreme weather has the potential to cause further havoc during the growing season in the northern hemisphere.

Brexit talks look to tackle what appear to be some insurmountable problems and need to be resolved within the next 10 months, currency markets will react to every headline, add to that the effects on the global economy of the Corona virus and you have a fairly toxic mix of issues. It is impossible to predict how it all plays out and we can but react to what is in front of us.

The issues outlined above could be added to but rather than get too bogged down with these, the job in hand is to focus on making the most of your spring barley crop.

Here are some suggestions:

With the potential of such a large barley crop the market signals for premiums are not exactly exciting so the question that confronts us is whether to go for yield or the malting premium (whatever that may end up being)? The answer is relatively straightforward. Growers on lighter soils with Laureate as a variety choice should aim to achieve a lower nitrogen (<1.65%) sample. There is a strong, latent demand for low nitrogen distilling varieties and the Scottish distilling industry consumes pretty much the whole of the Scottish crop and is now reliant on English barley and imported malt to satisfy demand.  Given the relentless rainfall, a dry, late sowing period on heavier soils could produce a higher nitrogen crop therefore enhancing the possibility of enhanced distilling premiums over brewing premiums.

Growers of Planet and Propino may well be better off to pursue yield over premiums. The growing season will of course have a major say in grain nitrogen contents and there is much evidence to suggest that applying over 150kg/ha of nitrogen is a waste of your money, with no yield advantage and potential environmental issues. Planet and Laureate are also good at diluting grain nitrogen when combined with their yield potential if the season allows.

The odds on a dry spell must be short and therefore it may well be worth applying a large percentage (60-70%) in or on the seedbed to ensure that it is available for the crop early on. This also helps in trying to achieve a low nitrogen sample.

Job to know how to approach this with all the unknowns we face, there is absolutely no question that the picture will change many times as we go through the next 5 months.

The gap between feed barley and feed wheat does not normally exceed £25 but if the projections of the potential UK barley crop are realised the gap may widen further. However this depends upon the international situation and where feed barley sits in relation to milling wheat and maize on the world markets. We have proved this season that priced correctly the UK can compete on the global front with over a million tonnes exported from the 2019 by Christmas and good export progress in the last 3 months. The wheat price looks resilient in light of the potential UK crop size and will react up or down to global market developments as the price of imports changes. It is therefore difficult to put a number on where malting barley premiums will be when it is hard to pin down a feed price. This has been evident of late with a very wide spread of quoted Oct-Dec feed prices, with the more maverick (or desperate) members of the grain trade trying to secure tonnage at prices that did not exist in the market.

In short the feed markets will drive prices until we start seeing how the northern hemisphere malting crop goes in and starts developing. It is worth remembering that conditions in southern Spain are very dry which contrasts with the very wet conditions in France, Denmark and of course the UK.

The other issue bearing down on the industry is of course Brexit and the fact that without a deal we face the same catastrophic tariff regime beyond 31st December 2020. Therefore the Sept-Dec 2020 period remains pressured and disconnected against the prospects of a large UK barley crop. This year has proved beyond doubt that English barley remains in high demand in mainland Europe, so a deal is imperative in order to keep the relationship and the 250-350,000t export market we have all developed over the years. We will watch with interest.

Just when everything was looking straightforward yet another issue jumps out of the woodwork and casts further doubt on the world economy. The drastic measures we have seen Italy introduce could well become common place and would have a catastrophic short term effect on demand for beer etc as sporting events and social gatherings are postponed. Clearly this scenario takes us all into unchartered territory and we will have to watch carefully as the whole thing unfolds and see what the longer term effects are.

We are being asked more and more by our customers questions about how you as growers are gauging, recording and potentially reducing environmental impacts and calculate carbon footprint etc…We would like to engage with a few growers to look at potential software packages and what you are doing to tackle these issues. Clearly this will not take priority over the next few weeks but as and when you are getting up together we would welcome some further knowledge/participation on this.

There is no doubt that we have some very interesting yet challenging times ahead but as producers of some of the worlds finest malting barley, malt, beer and whisky we are well placed to tackle whatever gets thrown at us.

If you have any queries please do get in touch with your usual Robin Appel Ltd contact or here at the office at Waltham Chase on 01489 896388 or enquiries@robin-appel.com

Having contended with Brexit, a pandemic and some extreme weather over the last few years you would have thought we might get a reprieve and be able to get a post covid recovery well underway. Little chance of that with the tragic news from the Ukraine; it obviously has a huge impact on global grain supplies, with steady increases in values over the last week or so as the tensions built and culminating in a near £30/t net rise on LIFFE wheat.

I am sure you will all agree that 2021 has been an extraordinary year and there seems no doubt that 2022 will follow suit. The volatility we are now witnessing in markets is set to continue with many factors at play, most of which we collectively have little or no control over or ability to predict. However, in the UK we remain consistent producers of high-quality barley which stands you in great stead going forward.

We have been looking for ways to help combat the challenge which has been presented to us all by the reduction in Oilseed Rape cropping across the UK. For years OSR has been a reliable break crop which has not only offered a reliable financial return, but also a great soil improver for the crop which follows. 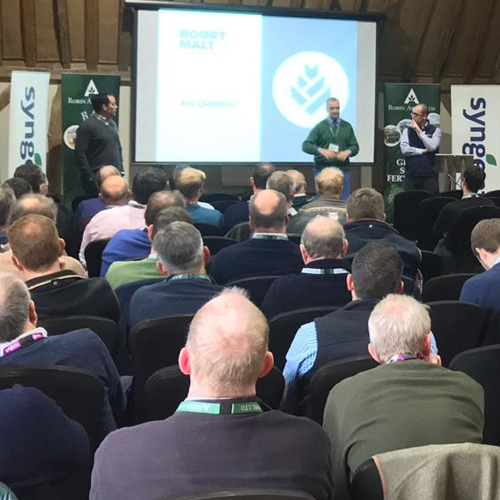